The road to Tiznit from Agadir passes through the town of Inzegane– a vast urban center to the south. Buildings of all shapes and sizes block the horizon; the streets are small and packed with cars. More cars are parked in a ramshackle way on the narrow pavements. The traffic is slow and chaotic. Roundabouts become an arena of combat. Who has priority of passage? Nobody knows or cares to know. If you think you can yield the right of way, the drivers behind you (and God knows there are so many) will make you think the better of it. Shrill, incessant honking and angry gestures reflected through the rear-mirror bespeak the collective fit of rage. You think you heard it well or was it just your imagination? Drive on you moron! After a while the rage creeps over you too, and you give vent to your share of the fury. Perhaps this is a normal defense mechanism– an involuntary reflex. It’s just as well that this mania remains within the bounds of indecent verbality and doesn’t develop into more brutal forms of violence.

But as Inzegane fades away behind, the road ahead slowly straightens up and the jammed traffic becomes fluid. For someone like me who has lived in Casablanca for many years, this sudden outpouring of vociferous noise, metal and heat is only a bit more of the same. You learn to live with it and even discover ingenuous ways of dodging it.

The plains of Sus-Masa meanwhile have acquired a certain vivid greenness that appeals to the eyes. The region is traditionally known for its rich agricultural sector. The produce which comes from these fertile lands is considerable and of an unrivalled quality particularly citrus, fruits and vegetables of which large quantities are exported to Europe and the United States. Cattle-breeding is also a widespread activity. Under the Green Morocco Plan, the ministry of agriculture has invested money and resources in order to modernize irrigation methods and increase productivity. The heavy rains that fell on the region this winter were long overdue and promise exceptional crops.

Tiznit lies about an hour away. The road is a sort of dual-carriageway; but almost periodically you come to a roundabout with cross lanes leading to some distant village on either side. The sea is miles away to the right completely concealed behind the plains. What is life like in these places? The question is on my mind all the time. As the city of Tiznit draws near, the road suddenly changes into a narrow lane and cars already shifting to lower gears begin to stream slowly. Bulldozers and trucks were noisily laying ground for the extensions. Perhaps in few months this remaining segment will be open to traffic. There was a side road to the right. I had no clue where it may lead me, but it offered a momentary relief from the dense traffic. I followed the track about a mile down until it changed into an unmade path. A conglomeration of mud houses lay ahead; this was obviously a douar and not a tourist destination. I turned back and stopped near a lonely tree. The silence was engulfing. It pierced through your ears. The fields around were green.

The synergy of silence and emptiness had an instant hypnotic effect on me. I could barely make out the echoes of the Mouedin’s voice calling for noon prayers in the distance. A car arrives, an old Renault 4 driven by an old man. Popping his head out, we exchange Salams; was anything wrong with my car? No, thank you. He waved his hand and continued his drive. I somehow took a fancy to the lonely tree. I sat there for a while.

The city of Tiznit is situated on a flat area. The road to the city center is one straight line. The Masjid Sunna is the most important landmark you see on your left when you reach the old town. There is a large open ground surrounding the mosque. Palm trees form a ring around a beautiful fountain. 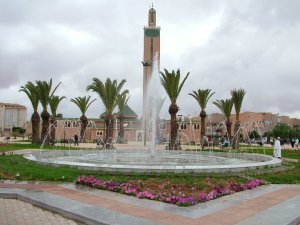 On the right lies the old part of the city hidden behind thick walls. According to some local historians, Tiznit was built in the late 19th century. Of the several tribes living in the vicinity, four large tribes were brought together to form an urban center which would command the vast and turbulent region of Sus. Beside the Susi inhabitants, a considerable Jewish community lived in the city. Tiznit gained a wide reputation for its excellent silver jewelry. Other crafts like pottery also prospered here in the past and even today you may find a great many artifacts sold by the artisans themselves in their booths and small bazaars.

Tiznit is also known for its tasty Amlou spread made of ground almonds and Argan oil. It’s the perfect spread to use with homemade bread or Tafernout bread if you ever have a chance to taste one. My wife and I are so lucky to have for friends a wonderful family living Tiznit. We were invited to dinner and in the true spirit of Moroccan hospitality, we were treated to the most succulent food if ever there was one.

Driving past Tiznit to Aglou was a short interval. The road is empty; henceforth this will be the normal state. Nature looms large, larger than the crust of bricks and cement which in the name of modern civilization had incarcerated our bodies and molded our spirits with their standard frivolities, arrogance and artificiality.

The soul is here reconciled with its origins. You are restored to the primal order of beauty and magnitude. The scope and extent of your sight stretch freely beyond the range of immediate familiar physical objects.

Aglou is a tiny village at the foot of a massive chain of hills overlooking the sea. It’s the perfect refuge for a writer in search of solitude and inspiration. Yet it can be very crowded in the summer, being only 10 miles away from Tiznit. In Winter there are fewer visitors unless you count the ubiquitous occupiers of the motorhomes. They are a class by themselves. My host in Tiznit said these guys should not count as tourists because they were so parsimonious with their money. The other day one of them went to the fish market and bought two sardines for lunch; one for him and one for the lady. 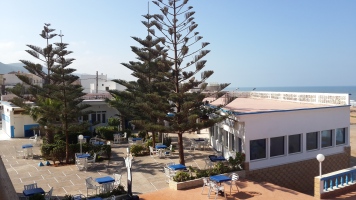 If you decide to spend a night in Aglou, the next best place short of a well furnished apartment is Hotel Aglou Beach if you can book a room looking towards the sea. The cold dark night and steady echoes of the waves in the distance are so benumbing that sleep would in no time invade every inch of your body. In the early morning the view from the balcony is mesmerizing. 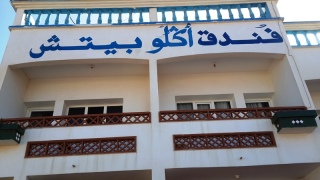 Breakfast is served on the terrace by a jovial chap. A plain meal — nothing to brag about. Below, a group of German youngsters wearing black wetsuits were getting ready for surfing.

The road from Aglou to Mirleft is the highlight of my journey. I already want to go there again. For one thing it’s a pleasant smooth drive along the green chain of hills and the vast blue sea. One has to really stop somewhere on the road to relish every bit of it, the fresh air, the absolute quiet, the colors, the earth.

Mireleft is only 15 miles away, so we got there in no time. It was not a terrific place after all. It’s simply a big village that lacks charm. After the splendid views in and around the Aglou region, the location of Mirleft seemed a bit disappointing.  The beach is concealed behind buildings. You walk down the stairs only to find a wide clearing squeezed between rocks. Sure it is wide enough to accommodate hundreds of vacationers but it is low and affords no view of anything.

The flat we booked at Tayought Guest House was a decent place. It has internet, hot tub water, satellite dish. The market was a only couple of streets away. Sara, the receptionist told us that for years the village suffered from chronic drought, but after this year’s massive floods, the place was a blackout; both electricity and water were cut off for  ten days. Everyhing was in short supply.

There seems to be little going on in Mirleft; this was low season and tourists on whom the village relied for its economic activity were hard to come by.  We drove to Legzira, another 12 miles down the coast. The views were not as superb as in Aglou and whereabouts, but it was comforting to walk down to the beach in Legzira (the island). It was sunny and just the right time of day for some jogging. But this was not an ordinary beach; it was the site of  extraordinary workings of nature. Even the best camera shots cannot begin to give the scene its due.

Water has dug a massive hole in the promontory in the shape of a giant arch. A couple of  hundred yards away lies another  arch-shaped structure carved by water in the massive headland.  Watching the effects of erosion caused by the elements over God knows how many years, one is inevitably overwhelmed by a sudden and unexplainable sense of awe. The mind is disarmed of its assertive vanity; here is a greater force at play.

The massive contours of the archways made of red earth and stone were damp; drops of water fell from the top and the bottom corners.  The sea when on high tides covers the archway and submerges the several giant rocks nestled on the shores thickly covered by mussels.

I climbed on top of one of the rocks and let my eyes lazily rest on the furthest point in the ocean. Insensitive to all human sounds, I felt it was a moment of dream or loss or both.

From Legzira to Sidi Ifni  there is a short distance. The city was recuperated from Spanish authorities on 30 June, 1969 after fierce attacks mounted by National Liberation Army.

A century earlier precisely after the signing of the Treaty of Tetouan in 1860, King Mohamed IV  was compelled to cede the adjoining territory  to Spain which marked the beginning of Spanish colonial presence in the south of Morocco. Spanish rule may have been over but the vestiges of Spanish colonial legacy are still visible in the city’s urban topography and architecture. Being brought up in Tetouan, I was struck by the strong similarities between northern cities and the city of Sidi Ifni.

The layout of the city and the locations of main administrative buildings  around a plaza are strongly reminiscent of Plaza Primo in Tetouan and Plaza Mohamed V in Chaouen. Even the sense of easygoingness I am told is much the same. Our adviser Sara in Mirleft told us if you arrive in Sidi Ifni early in the morning you will think it is a ghost city. Following the recent floods, the town looked much run-down. There is very little economic activity taking place in the town and the infrastructure is not imposing either. Sidi Ifni is still awaiting better times.

After a stroll in the city and a brief visit to its fish market which surprisingly had no fish to speak of, it was time to make a U-turn. Sidi Ifni was our furthest point to the south. From there the road to Guelmin, the Gate of the Desert, stretched to the south east. With much regret we could not take that road. Perhaps another time. The road to Mirleft and then to Marrakech the city of Bahja and seven saints lay ahead. 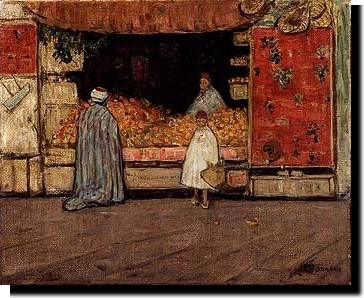 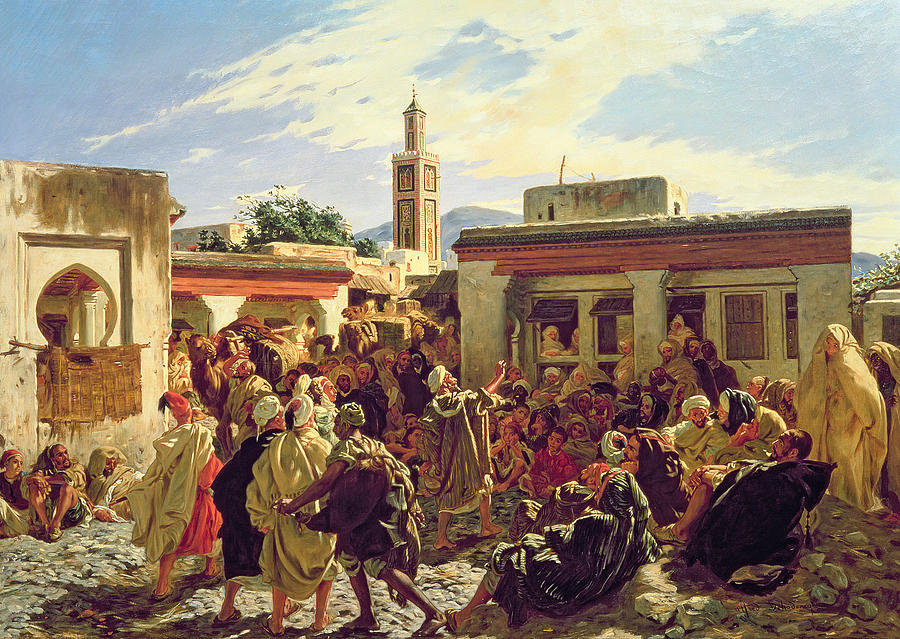